Topeka Foundry & Iron Works Co. was founded in 1876 by John Masching. It is one of the 6th oldest businesses in Topeka. In the early 1900’s Glenn Bybee brought his knowledge of steel and fabrication to the company after working for several years at Capital Iron Works. At that point in time, he partnered with John Mashing, to form Topeka Foundry & Iron Works Co. The company employed 15 workers at that time. 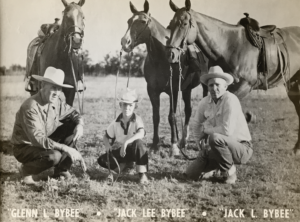 During the depression, the employees were kept busy by building Glenn Bybees’ home. It still stands as the first steel framed home in Topeka. During that time frame, in the best interest of the company, it became incorporated in order to survive the tough times of the depression. 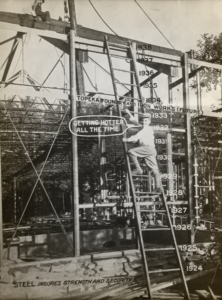 In 1961, 3rd generation Jack L Bybee started working for the company. Today he has 56 years under his belt, of which 36 years are as President. In 1961/1962, a new building was built to house the Machine Shop Dept. and Steel Fabrication Dept. A grand opening was held in 1962 to celebrate the new building. In 1963, a Specialty Dept. was started, offering Republic Steel Doors and Frames, along with finish hardware products. This enabled the company to bid and supply misc. steel fabrication from the Structural Dept. and doors, frames, and hardware from the Specialty Dept. in the Topeka area, and surrounding communities from the Nebraska border to Emporia, and Salina to Kansas City.

By the early 1970s another 4000 sq/ft. machine shop space was added. This allowed for larger lathes and milling machines to be purchased.

In 1979, the company expanded across Jackson St by purchasing the old McPherson/Carlson lumber yard, demolishing and razing it, then building back with a 6500 sq/ft. building equipped with a large shear and saws, a steel yard, and a crane that extended over the street to enable off-loading incoming trucks. Today the company not only stocks Hot/Cold Rolled products, but also special alloys including aluminum and stainless steel products. 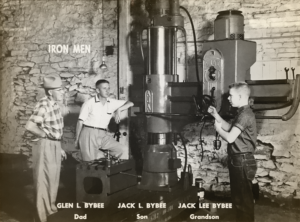 In 1982, the first CNC machine was installed. A Mori-Seiki SL7 was purchased new for $100,000 and was paid off in 9 months. Recognizing the need to service Goodyear Tire and Rubber Co., the machine shop greatly expanded its facility, by adding a 16,000 Sq/Ft. addition in 1989. This allowed a Heavy Bay to be built with a 75 ton capacity crane and even larger lathe and milling/turning capabilities.

With the Structural Dept. remaining at 318 Jackson, the Specialty Dept. took over the old machine shop giving them greater efficiency. But by the late 1990s they had outgrown their building. So the old 7Up bottling company building at 129 SE Quincy was purchased to house the Specialty Dept., bringing the sales force and shop employees under one roof. In addition they now offer toilet partitions, toilet accessories, and wood doors. At that point in time they became home to Old Ironsides Lock & Key, with the capability of all locksmith services. The name Old Ironsides Lock & Key, was derived from an old polo club in existence in Topeka, Ks. from the late 1930’s to the late 1950’s.

In 2005 the machine shop again expanded with a 5000 Sq/Ft. addition to house a machine assembly area and have since added 4 large CNC machines in this expansion.